The beat goes on: The Eddy

Nobody can question Damien Chazelle’s jazz credentials; the Academy Award-winning writer/director of Whiplash and La La Land has demonstrated a bravura flair for crowd-pleasing, music-oriented dramas. His involvement with The Eddy — as co-executive producer, and director of the first two episodes — therefore generated high expectations. 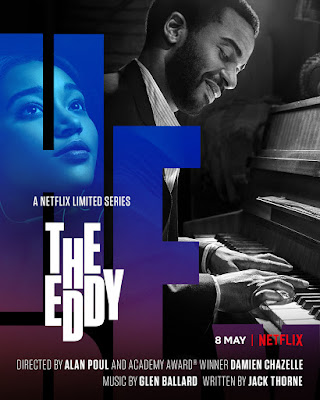 Too bad he wasn’t also involved in the writing.

The 2020 Netflix miniseries comes from creator Jack Thorne, who wrote five of the eight episodes, and shared writing credit on the other three. Noting that he also scripted last year’s adaptation of Philip Pullman’s His Dark Materials tells us everything we need to know about Thorne; his world-view is dour, dreary and relentlessly depressing. All the characters in The Eddy are unhappy at best, forlorn and miserable at worst. The core plot drags along solely because these people don’t talk to each other, at least not truthfully. Our primary character lies relentlessly — foolishly — even when there’s no good reason to do so … except to stretch things along in contrived fashion.

Ah, but the music is sensational, all of it written by composer/keyboardist Randy Kerber and songwriter, lyricist and record producer Glen Ballard. Jazz is ubiquitous: mostly live performances within the context of the drama, running at length.

“Randy and I have both been working in film and television our whole careers,” Ballard observed, “and I don’t think either of us has done anything like this. Music normally comes in at the end [of production], but in this case not only was it there at the beginning, but also during shooting. For me it was fundamentally essential to the tone, and this indefinable energy which comes out of real people playing music in real time.”1

“On occasion during filming,” Kerber added, “Damien asked us to play longer. So we did long performances, and these then became embedded into the drama, which then underscored what was happening thematically. Which meant it reached a point where the music and story reached a level of interplay that added something new.”2

Chazelle agreed. “It was important to let things take their course. That was a desire all the directors seemed to share, whether it was improvising around the edges of a scene, filming the music live, or doing full takes and seeing what happened. That helped give the show some of its flavor, and is certainly in the spirit of jazz.”3

Intentions notwithstanding, whether the music compensates for the overcooked melodrama will depend on the eye-rolling tolerance of the individual viewer. 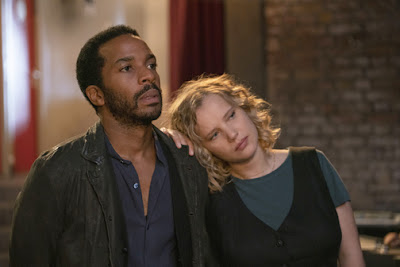 The Eddy is a jazz club in the midst of today’s multicultural, multi-faith, post-Charlie Hebdo Paris. The popular night spot is run by partners Elliot Udo (André Holland) and Farid (Tahar Rahim); Elliot oversees the artistic side, and manages the club’s resident combo, while Farid handles the business end. The quintet features Randy (Kerber) on piano; Jude (Damian Nueva Cortes) on bass; Ludo (Ludovic Louis) on trumpet; Jowee (Jowee Omicil) on sax; and Katarina (Lada Obradovic) on drums. (All are actual jazz musicians, and — believe me — it shows.) Vocalist Maja (Joanna Kulig) also is Elliot’s on-again-off-again girlfriend. Dialog slides effortlessly — often in the middle of a sentence — between French, English and the darija Arabic dialect spoken by Algerian and Moroccan characters.

“We were lucky to find a band as multicultural as the city,” Ballard noted. “Our bass player is Cuban, our drummer is Croatian, our singer is Polish, our sax player’s from Haiti, and our trumpet player is from France. So it’s a truly international band, but the common language is music.”4

Alas, Farid has made some dreadfully ill-advised decisions; as the story begins, his financial relationship with a local Eastern European criminal syndicate — about which Elliot knows nothing — is unraveling. Farid doesn’t survive the first episode, having foolishly “retained” a chunk of the counterfeit Euros being laundered through the club. This puts Elliot in the cross-hairs of the imposing Zivko (Alexis Manenti), who — in progressively threatening fashion — demands the cash be returned. Elliot doesn’t share any of this with the band, preferring to let them wonder about his increasingly agitated behavior; he also doesn’t come clean with perceptive police Commandant Keita (Léonie Simaga), who naturally wonders about the vicious manner of Farid’s murder. Goodness, Elliot isn’t even candid with Maja.

Elliot already is an emotional wreck. Although once a celebrated New York jazz pianist, he hasn’t performed for four years, since the death of his son: a tragedy that also destroyed his marriage to ex-wife Alison (Melissa George), who remained in Manhattan. The breakup had a devastating effect on their teenage daughter Julie (Amandla Stenberg), who — also in the initial episode — is sent to live with Elliot. (The implication is that Alison’s new husband can’t stand the girl, but that’s uncertain.) Julie is the epitome of arrogance and troubled defiance; she also drinks too much and likely spent some time in detox, thanks to a fondness for cocaine. She quickly sets her eye on Sim (Adil Dehbi), the club’s young bartender; he quickly perceives that she’s bad news, but nonetheless grows fond of her.

Let’s see … what else? Farid’s widow, Amira (Leïla Bekhti), who becomes Elliot’s new business partner, naturally is devastated by the violent loss of her husband. Katarina spends her days caring for the father who abused her as a child, now an unresponsive invalid occupying a bed in their tiny apartment. Jude, a former heroin addict only barely able to remain clean, flirts with quitting treatment when — in episode four — his former lover Habiba (Jisca Kalvanda) shows up to announce her impending marriage to somebody else. In episode six, Sim desperately wants to raise enough money to allow his beloved grandmother, who expects to die soon, to make a pilgrimage to Mecca.

Each episode is named for the individual on whom it focuses, but that spotlight isn’t all-encompassing; each episode also grants Elliot plenty of opportunity to make additional bad decisions.

We never learn anything about Randy, Ludo and Jowee, who seem to have no life outside the club; I suspect Thorne was saving their back-stories for future episodes in a second chapter that (as these words are written) seems unlikely to occur.

The series has two key anthems: a lively swing tune titled “Call Me When You Get There,” boasting Maja’s saucy vocal backed by lively piano, trumpet and sax; and a gentle ballad Elliot writes and names for the club, which Maja introduces during a gorgeously heartfelt reading, against soft piano and horns.

Indeed, the miniseries resulted from this tune, which Ballard composed a decade earlier. “I wrote a song called ‘The Eddy,’ which encapsulates the concept of a place where great musicians have a sanctuary, and have an intimate audience, and they all come together in these transcendent moment,” he explained. After Chazelle became involved with what was beginning to feel like a miniseries, Ballard and his band met Thorne and gave him 40 recordings; he went into the creative tank and drafted an eight-episode outline that featured the songs sprinkled throughout. “[That was] an act of legerdemain,” Ballard admitted. “He did something magical with our songs, [creating] a dense matrix of characters all converging on the club.”5

The first episode opens on a before-hours club rehearsal of “Call Me”; it runs full-length, as is the case with dozens of rehearsal and performance numbers to come, as the series progresses. Episode three (“Amira”), dominated by Farid’s wake, is highlighted by a terrific Dixieland blues jam in her home, which brightens the thus-far somber day; along with a poignant solo keyboard lament (“The Long Way Home”) by Kerber; and a propulsive, heavily percussive ballad (“Not a Day Goes By”) with touches of scat. 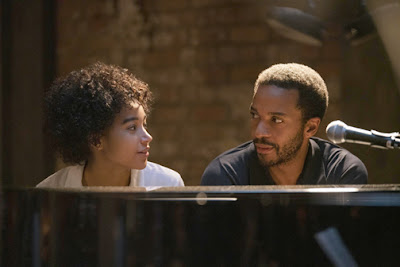 Episode four (“Jude”) concludes when Elliot and his bassist, alone in the club late at night, duet on a pair of soft numbers: “Play All Night” and “Paris in September,” both lovely. We gradually learn that Julie has a terrific voice, when she deigns to use it; this, clearly, will be the bridge that repairs the bond with her father. She and Sim share a charming romantic duet (“Sooner or Later”) in episode six, backed by the delighted band; Elliot, in turn, finally understands that his daughter never will be happy at the international school into which she has been dumped. This girl is a singer.

Episode seven (“Katarina”) is assembled quite cleverly. Much of the time is spent at the club, where Elliot finally has arranged a recording session with Levy, for that much-hoped-for album. Two songs are laid down during this eventful day: “Barfly,” a mischievous, come-hither swinger that Maja gives plenty of saucy heat, against vibrant piano and out-there sax; and “Can’t Stay Away,” an initially fast-paced ballad that slides in and out of tempo shifts, and boasts terrific solos. Multiple takes of both begin as diegetic tunes in the club, and then become non-diegetic as the story follows Elliot’s increasingly desperate actions elsewhere, and Katarina’s similarly reckless Hail Mary threat against upper-echelon syndicate boss Sami Ben Miled (Dhafer L’Abidine).

The final episode (“The Eddy”) opens on the rehearsal of another flirty ballad (“Gossip”), which once again highlights Maja’s playful delivery, and gains additional pizzazz from swinging horns and some call-and-response vocal touches by Jude. And then — finally! — we get the father/daughter duet we’ve long awaited: a melody actually composed by Duke Ellington, which Ballard gave lyrics. It becomes the lullaby that Elliot once played for Julie, when she was a child. Now titled “Snow,” it’s a soft, sweet ballad that Julie croons poignantly, against her father’s lyrical keyboard work. 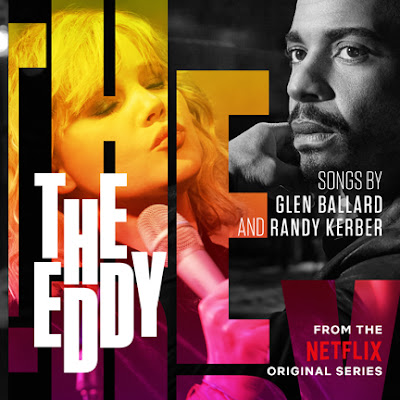 The miniseries concludes as everybody joins for a raucous street performance of “The Eddy,” although this triumphant (?) moment is deceptive; Thorne leaves two massive hanging chads, apparently pending that hoped-for second season. Ergo, we get no resolution. The final set of end credits unspool to a tasty instrumental reading of “Call Me When You Get There,” taking us full-circle from the top of episode one.

The soundtrack album features all of the key songs, including two versions of “The Eddy.” But many of the quieter numbers and instrumental arrangements are left behind: Kerber’s solo on “The Long Way Home”; Jude’s playful song (“Toda La Gente”) performed to Habiba in a café, and his two late-night duets with Elliot in the club; a sweet, soft bossa nova tune (“Play All Night”) performed by the entire combo; and that final instrumental version of “Call Me When You Get There.” Chazelle really should have pushed for a two-disc set.