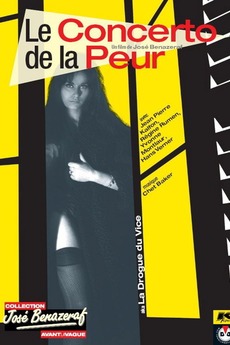 Absent Chet Baker’s aggressively dissonant free jazz score, there’d be little to recommend 1963’s Le concerto de la peur. Director José Bénazéraf’s micro-budget crime drama drags along at a snail’s pace, as rival gangsters solemnly discuss, debate and deliberate how to dispose of each other. Guy Fanelli’s script is drawn from Anne-Marie Devillers’ 1959 novel, The Scent of Fear; in his on-screen foreword, Bénazéraf claims to be intrigued by how “this so-called universe of mobsters … is dominated by a very great puerility [wherein] the brutal games of these ‘heroes’ are games of childhood, and the absurdity of these games, pushed to their extreme, inevitably lead them to death.”

The story unfolds during a single day. Lab tech Nora (Yvonne Monlaur) accepts a date with co-worker Chevrel (Robert Darame), not realizing that he also belongs to a narcotics syndicate run by Eric (Hans Verner). Chevrel doesn’t survive long, executed by a thug belonging to Eric’s rival, Sacha (Jean-Pierre Kalfon). The latter then ups the ante by kidnapping Eric’s brother, Fred (Marcel Champel); the following morning, Eric orders his men to kidnap Nora. (The reason for that remains fuzzy.) Although she initially displays considerable spunk, and even kills her scantily dressed “handler” (Regine Rumen, as Vanda) during an escape attempt, Nora then succumbs to the world’s fastest — and most extreme — case of Stockholm syndrome, falling in love with both Eric and his lieutenant, Valdo (Michel Lemoine). 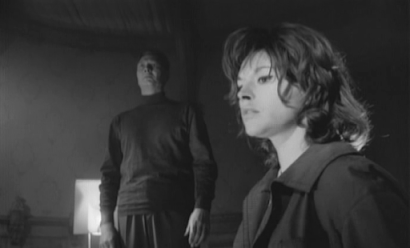 The gun-blazing climax piles up bodies with Shakespearean élan; Nora ultimately is abandoned when Valdo, the lone surviving gang member, drives off without her.

Bénazéraf’s pacing is plodding at best; tension and occasional flashes of urgency result solely from Baker’s forcefully harsh jazz riffs. (You’ll find nothing resembling a melody here.) He’s supported by sax, bass and drums; alas, the players’ identities have been lost to the mists of time.

The lengthy prologue unfolds without music: Nora’s date with Chevrel, and her refusal to let him spend the night when he takes her home, despite his obvious terror. She learns of his murder the following morning, when her concierge mentions a body having been discovered nearby. Soft bass licks follow her up the stairs to her apartment, at which point the title credits finally begin; Baker gets a generous acknowledgment (“Chet Baker en a écrit et interprêté la musique”). Nora’s unease is amplified by twitchy sax and trumpet; her anxiety mounts when two “policemen” ask her to identify the body, at the morgue. They’re actually Eric’s men; one chloroforms her in the back seat, and then molests her, the horns literally shrieking as he exposes her breasts. Valdo (to his credit) puts a stop to that; the jangly jazz continues as the car pulls up in front of Eric’s palatial estate, and she’s carried inside.

Nora regains consciousness under Vanda’s disapproving eye; a lone, mournful trumpet is heard in the background. “He plays like that for hours,” Vanda solemnly explains, in response to Nora’s curious gaze. “He” turns out to be Eric — ghosted by Baker — who apparently improvises while contemplating his next nefarious moves. Eric also happens to be blind (which seems an insurmountable handicap, for somebody masterminding a heroin operation). 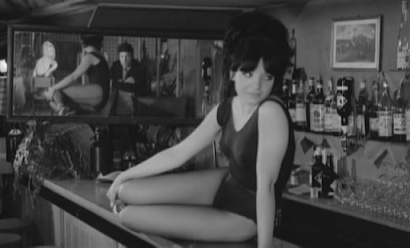 A “discussion” between the two gangs is set for 2 a.m. in the nearby woods; frantic bass and drums accompany both sets of men as they pile into their cars and head for the rendezvous, each group planning to gun down the other. Sasha, meanwhile, slips into Eric’s home with similarly murderous intentions. The gun battle in the woods takes place against an almost swinging explosion of bass and drums. In the aftermath, surrounded by corpses, Nora and Valdo make love (!) against another cacophonous blast of trumpet and sax. Nora’s assumption that they’ve therefore become an item proves premature; Valdo drives off — apparently doing “the decent thing” — as she watches in despair. Bénazéraf moves in for a tight close-up on her shattered gaze; the music cuts off abruptly as the word “Fin” appears. Fade to black.

The claim that Le concerto de la peur was “banned in over half the world” — as posters shrieked in 1965, when released in America as Night of Lust — appears to be hyperbole, as there’s no evidence of this. But the film was treated abominably in the States; grade-Z producer Bob Cresse chopped out massive chunks of exposition, and then had fellow exploitation filmmaker Lee Frost shoot additional sequences of writhing naked women. Even with this new footage, the American print runs only 58 minutes, 13 minutes shorter than the original French version (which indicates how little of Bénazéraf’s work remained). 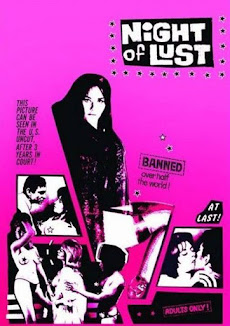 Ironically, this cinematic Frankenstein’s monster played an important role in the evolution of American artistic freedom. As described in Jeremy Geltzer’s fascinating and highly informative book, Film Censorship in America, Night of Lust was confiscated by authorities when shown at a drive-in theater in St. Louis, Missouri; the Supreme Court of Missouri subsequently validated this action, by declaring the film obscene. But the theater owner wouldn’t surrender, and the case eventually reached the U.S. Supreme Court in 1971 … at which point the Missouri ruling was reversed. (This led to a fresh set of posters, proudly proclaiming “This picture can be seen in the U.S. uncut, after 3 years in court.”)