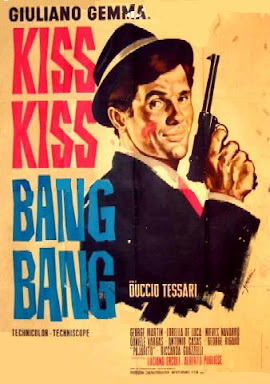 Apparently unable to fully exercise his inane side while co-scripting 1965’s James Tont operazione U.N.O., Bruno Corbucci and a more cooperative pair of lunatic writers went full-bore bonkers for 1966’s Kiss Kiss – Bang Bang. Its pretentions toward spy spoofery notwithstanding, this can’t be considered more than a dim-bulb children’s movie … and a very bad one, at that. Most of Bruno Nicolai’s score veers from cartoon effects to silent movie chase cues, with plenty of mickey-mousing intended to help sell sight gags that nonetheless fall flat. Even the title song — gamely crooned by Nancy Cuomo, against a credits sequence clearly modeled on Maurice Binder’s Bond efforts — is an obnoxious pop trifle that gets nowhere near the power anthem status to which it aspires. That said, patient jazz fans will be rewarded by Nicolai’s tasty arrangements of the primary theme and two love themes, mostly combo readings with the melody taken by sultry sax or trumpet. A few run at pleasant length behind flirty bedroom sequences.

Former British Secret Service agent Kirk Warren (Giuliano Gemma) went rogue and stole $1 million, a crime for which he’s about to hang, as the film begins. He’s granted a last-second pardon by his former handlers, because they believe him the only agent capable of locating a crucial secret formula before nefarious terrorist “Mister X” can get his hands on it. Warren agrees, and is joined on this mission by three trusted associates: security expert Professor Padereski (Antonio Casas), who literally “sniffs out” death traps; mousy, accident-prone Dupont (Manuel Muñiz), a talented safe-cracker who works wonders with a corkscrew; and Chico Pérez (George Martin), a skilled acrobat nimbly able to bounce over electrified fences.

Snatching the formula from a safe deep within a heavily guarded stronghold proves simple, at which point Warren and his minions decide to bypass the British and sell it to Mister X … for $4 million. This scheme repeatedly runs afoul of comic book villain Tol Lim (Daniele Vargas), who — as if his faux Asian appearance isn’t offensive enough — minces about in caftans and roller-skates on the deck of his yacht. (Just because, y’know.) 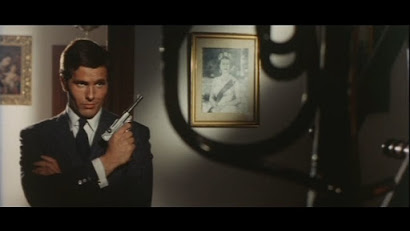 Director Duccio Tessari and his writers insert numerous Bondian nods. British agents 003 and 008 come to bad ends, and Warren cheekily adopts the iconic Sean Connery pose — arms crossed against his chest, one hand holding a gun — with a knowing grin. The bare-bones plot lurches along for an interminable 112 minutes due solely to kitchen-sink excess: a surveillance agent concealed in a cylindrical trash can (shades of TV’s Get Smart!); Warren’s MI6-issued pistol, which shoots laughing gas; an impressively verbose parrot entrusted to remember and recite the complex secret formula; numb-nuts thugs who repeatedly shoot each other by mistake; collapsing beds, closets and other furniture; a cake in the face; and an MI6 contact that happens to be a talking pigeon (which, no doubt, shares a flat with the talking mouse from James Tont operazione U.N.O.).

Everything climaxes during a protracted chase and knuckle-bruising melee taking place on various deserted amusement park rides, within a hedge maze and mirror maze, and atop an historic oceanside landmark. If it all sounds like classic Keystone Kops territory, be advised: This film isn’t that good.

Nicolai’s first welcome jazz cue is a smoldering blend of sax and soft drumming, heard when Warren, freshly released from the gallows, has an enjoyable reunion with sexy girlfriend/fellow agent Alina Shakespeare (Nieves Navarro). When they later discuss what they might have done with the stolen $1 million, Nicolai unveils a secondary love theme: an equally seductive clarinet melody against quiet vibes, bass and drums. Warren’s later encounters with Frida (Lorella De Luca), a bubble-headed blonde who lusts for his body, are accompanied by similarly lascivious sax combo cues. 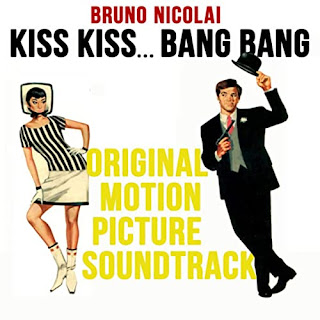 Alina’s reappearance, later in the story — now seemingly one of Tol Lim’s accomplices — warrants a reprise of the secondary love theme, the melody delivered this time by muted trumpet at a slightly faster tempo. Nicolai employs Vegas-style, big band swing during the film’s one impressive stunt sequence, as Warren skis down a steep, snow-covered slope at Italy’s Cortina d’Ampezzo; anticipating a later Bond movie stunt, he detours within a bobsled run before reaching the bottom and snatching a trophy intended for somebody else.

Cuomo’s vocal version of the title song was released as a 45 single on Italy’s Parade label, with one of the love themes (“Kiss Me Warren Please”) on the B side. Several decades passed before a 52-minute digital version of Nicolai’s score was released in 1997, on Japan’s General Music label. One additional track was added when re-released three years later, on Japan’s Volcano label. The definitive version, at 61 minutes, arrived in 2018 from Quartet, as part of the box set Bruno Nicolai: The Eurospy Film Music Collection; the package also includes his scores for 1966's Upperseven, l'uomo da uccidere and 1967's Agente Speciale LK.