From the cutting-room floor: Alfie

I hated dropping this one from the manuscript, but — at the end of the day — it simply isn’t a crime drama (although I tried hard to justify such content). The terrific Sonny Rollins score screamed for more attention than it obtained at the time, but including Alfie would have demanded that I similarly open the door for dozens more jazz-backed character dramas … and I didn’t have the space.

Thank goodness for the limitless real estate afforded by blogs! 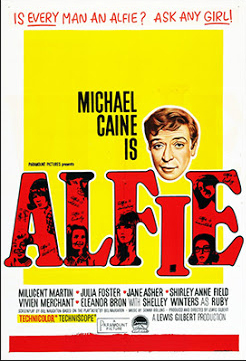 Mention the musical component of Michael Caine’s career-making performance in Alfie, and most folks will cite the Burt Bacharach title song, with Hal David’s clever, narrative-referencing lyrics ... and that’s where the conversation stops. Nobody remembers sax legend Sonny Rollins’ superb jazz soundtrack, possibly because film director Lewis Gilbert employed it so sparingly. Rollins must have been frustrated, particularly because his themes play so brilliantly on two levels: buoyant and larkish, but always with an undercurrent of pathos that mirrors the title character’s slowly dawning realization that his blithe, hedonistic approach to life is soulless. As Alfie confesses, at the film’s conclusion — breaking the fourth wall and addressing us directly, as he has done so frequently throughout — “I ain’t got me peace of mind ... and if you ain’t got that, you ain’t got nothing.”

Including Alfie within these pages was a stretch, as it’s a character-driven drama about an unapologetic rake with an appalling attitude toward women: nary a heist, gun battle or car chase in sight. That said, as Alfie admits to us in one scene, he “always has a fiddle on” ... and that makes him larcenous, however mildly, which justifies the film’s presence here. (Besides, missing the opportunity to discuss Rollins’ score would be a crime all by itself.)

[Alas, the crime ultimately was committed during the final edit.] 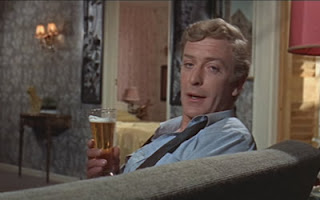 Gilbert’s film is based on Irish playwright Bill Naughton’s 1963 stage production of the same title; Naughton also supplied the screenplay. The episodic narrative follows Alfie Elkins’ brief encounters with a series of “birds,” heedless of how he ruins their lives: ultimately unsatisfying affairs that increasingly undermine the callous insouciance with which he breezes through each day. He has a child with his “stand-by” girlfriend, the sweet but simple Gilda (Julia Foster); Alfie comes to love the little boy but refuses to tie himself down, so Gilda marries Humphrey (Graham Stark), a sympathetic bus conductor who adopts the lad as his own, forever removing him from Alfie’s influence. Alfie moves on to a young hitchhiker, Annie (Jane Asher), who does everything for him — cooking, scrubbing floors, tending to laundry — but he ultimately cannot abide such selfless kindness.
Meanwhile, a one-off with the married Lily (Vivien Merchant) proves catastrophic when she gets pregnant; her husband has been convalescing at a sanatorium, and therefore would know that his wife had been unfaithful. This requires the grim intervention of an illegal abortionist (Denholm Elliott), a process that so unnerves Alfie that he decides to make a permanent thing of his occasional trysts with the voluptuous, somewhat older Ruby (Shelley Winters). Alas, she turns out to be Alfie’s perfect counterpart, albeit with the wealth to support her casual lifestyle; the story concludes as Ruby dumps Alfie for a younger bloke, leaving our lonely protagonist to bitterly reflect on everything that he has done wrong.

Rollins credited his collaboration with Gilbert for the way in which the various themes emerged, citing the director for “a very good understanding of music, without knowing all the technical aspects of it. If the score is a success, he deserves a large share of the credit.”1 It’s a generous statement, considering Gilbert’s apparent allergy to music, which he employs mostly as 10- to 15-second “bumpers” between occasional scenes, and to suggest the passage of time.

“I was playing at Ronnie Scott’s club in London, in early 1965,” Rollins recalled, years later. “The movie was being made there at the time. While I was at the club, I was asked by Gilbert to write sketches for the film. I recorded the sketches for the movie with a small group. For the [subsequent] soundtrack, Oliver Nelson arranged a beautiful score based on my sketches. Oliver fleshed out what I wrote. He was a beautiful arranger.”2 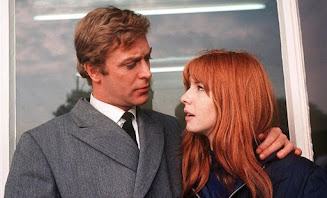 The film opens with a brief quote of “Alfie’s Theme,” a bright, boisterous 4/4 swinger powered by bass and drums, with Rollins’ sax solo echoed by the assembled horns. A giddy Gilda rushes home one afternoon to a cheerfully roaring, double-time cue (“Street Runner with Child”) that mirrors her naïve assumption that Alfie will be delighted by her newly discovered pregnancy: an ebullient mood shattered by his reflexive callousness. Tracey’s soft, melancholy piano solo perfectly captures Gilda’s heartbroken letdown. Ah, but Alfie’s in for a rude awakening, as a few years pass and their son grows into a toddler; he bonds with the boy during a montage punctuated by a brooding cue that opens with Rollins’ mournful sax lead (“Transition Theme for Minor Blues, or Little Malcolm Loves His Dad”). This cue achieves its ironic intent later, when Alfie chances to see Gilda, Humphrey, and the child they’ve had together, with little Malcolm lovingly ensconced in this group; the “Dad” that Malcolm has grown to love is Humphrey, not Alfie.

Brief bursts of “Alfie’s Theme” reprise numerous times throughout the film, notably whenever he picks up a new “bird,” but the tune’s larkish nature slowly becomes mocking, as each fresh encounter reveals additional aspects of Alfie’s shallow nature. The ill-advised encounter with Lily begins with a private boat ride along a quiet waterway; Alfie’s initially generous effort to bring some light into the woman’s life — she worries about her husband’s health — is complemented by a graceful waltz cue (“Impulse”) that characterizes how time sometimes seems to stop, during a perfect afternoon. But this benevolent tone quickly fades, as the two unwisely succumb to casual sex. Months later, the abortionist having come and gone, Alfie takes a morose, guilt-laden Lily home against a slow, sad guitar solo. 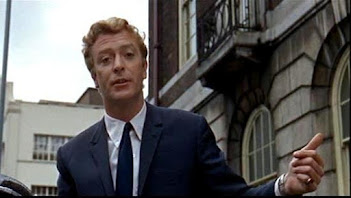 The frivolity of Alfie’s initial romps with Ruby, finally, are shattered when she dumps him to a slow, doleful cue (“He’s Younger Than You Are”): Seaman slowly marks time with gentle cymbal beats, while we can practically hear Rollins’ sax saying, Well, what did you expect? Caine faces the camera one final time to deliver his closing soliloquy, as he reflects back and wonders: “So what’s the answer? That’s what I keep asking myself: What’s it all about?” That final line cues the credits we never saw as the film began, which unspool against Cher’s energetic reading of the Bacharach/David tune: a song soon to become a hit, in the process blowing Rollins’ score out of everybody’s consciousness. Bacharach/David’s “Alfie” was nominated for an Oscar; Rollins’ score was ignored by the Academy, but it did garner a Grammy nomination.

Rollins’ brief cues were expanded, arranged and orchestrated by Nelson for the Impulse Records soundtrack LP, recorded on January 26, 1966; the album was digitized in 1987. Each of the five tunes — with a reprise of “Alfie’s Theme” — grants lush solos to all the instrumentalists. (The actual film score sketches, with the personnel cited above, never have been released.) Rollins took the tenor sax lead for this album, and was joined by Jimmy Cleveland and J.J. Johnson, trombone; Phil Woods, alto sax; Bob Ashton, tenor sax; Danny Bank, baritone sax; Roger Kellaway, piano; Kenny Burrell, guitar; Walter Booker, bass; and Frankie Dunlop, drums. 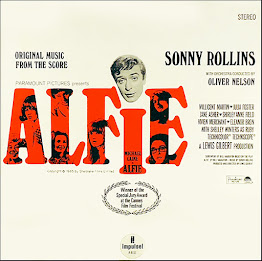 It’s a gorgeous 33 minutes of solid, swinging jazz: a minor masterpiece in its own right, with Rollins’ compositions developed and enhanced in a way that the film simply couldn’t have supported. Consider, as one example, how “Alfie’s Theme” segues to nifty solos by Burrell and Kellaway, Booker’s bass keeping solid time in the background. The album garnered well-deserved fame among jazz fans, and the U.S. and UK releases were complemented by LPs issued on labels in Japan, Canada, Spain and France. The late-1980s CD release was equally popular throughout the UK, the States, Europe and Japan. Rollins also included his “Alfie” theme on Sonny Rollins in Japan, recorded during a tour in 1973.

“I hope to compose for more films” Rollins enthused, in the original Alfie LP liner notes, “because I’ve been wanting to work in explicitly dramatic areas for a long time. Not only motion pictures, but the theatre too.”4 As it happened, that never came about; Alfie remains Rollins’ sole big-screen dramatic score. Years later, he hinted at the reason why: “I enjoyed writing and playing the score for Alfie very much. However, if I were offered another opportunity such as this, I would only do it if the film highlighted the music, rather than the story itself.”5