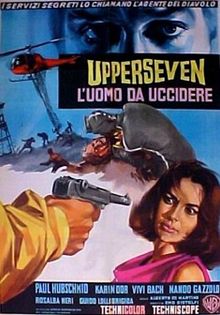 Writer/director Alberto De Martino was granted a better than average budget for 1966’s Upperseven, l’uomo da uccidere, released in the States as The Spy with Ten Faces (only four, actually, if my count is accurate). This Italian/West German Eurospy entry offers a reasonably credible storyline that takes ample advantage of production designer Francesco Cuppini’s lavish sets; cinematographer Mario Fioretti also is kept busy during a globe-trotting adventure that sends its characters to London, Copenhagen, Rome, Capetown, Johannesburg and Basel (Switzerland). Best of all (for our purposes), De Martino grants plenty of space to Bruno Nicolai’s often vibrant jazz score, which has strong echoes of John Barry’s Bond work, without being slavishly derivative. On the other hand, the title character’s smug over-confidence often feels condescending; one wishes he’d get bloodied a bit more, to instill some humility.

The dastardly Kobras — a well-sculpted villain, played with calmly sinister panache by Nando Gazzolo — cooks up a complicated scheme to disrupt a Pan-African alliance being financed by South African diamonds. The gems are to be traded for American dollars, at which point Kobras and his minions will break into a Swiss bank and steal the currency, leaving an equal amount of counterfeit bills to cover their tracks. Kobras intends to use the stolen funds to further bankroll a concealed missile base on behalf of Chinese partners. Determined to save the day: Agent Paul Finney (Paul Hubschmid), code-named Upperseven — senior to 007, one assumes — a master of molded mask disguises, accompanied by useless CIA agent Helen Farheit (Karin Dor, soon to bedevil James Bond, in You Only Live Twice). Finney also makes ample use of a weaponized cane, perhaps borrowed from The Avengers’ John Steed.

There’s no title sequence; the credits appear as Finney cleverly trails a car driven by Kobras’ primary henchman, Santos (Guido Lollobrigida), while chanteuse Paolo Orlandi delivers a saucy reading of the bold, brass-heavy title song (apparently crooned by a love-struck lass who prays that Upperseven will “set her free,” because he no longer wants her). It’s a vibrantly percussive tune that warrants placement alongside Barry’s best 007 power anthems.

Once at their destination, Finney employs a mask to invade Kobras’ smuggling operation; he assesses and photographs the situation, while backed by a swinging instrumental arrangement of the title theme, which favors muted trumpet and throbbing bass. Finney then calls in reinforcements, sets a bomb and blows everything to smithereens: a sequence that introduces Nicolai’s secondary action cue, which opens with a drum roll and a powerful, mid-tempo 1-4-1-2 motif. (It reprises a few times as the story progresses, notably when Kobras helps a colleague escape from prison.) Police round up most of the surviving bad guys — Santos departed earlier — but Kobras escapes when he’s spirited away by resourceful gal pal Birgit (Vivi Bach, far more capable than Helen Farheit) and Chen, their Chinese partner.

This is mere preamble. Back in London, Finney learns the complexity of the evil scheme from his M-like superior, Sir Richard (Bruno Smith), after which the script takes a bizarre detour. Finney bumps into the sultry Pauline (Rosalba Neri), a model just returned from Paris; she’s introduced against another sassy arrangement of the title theme, the melody taken this time by a whistler. She and Finney seem to have been an item at some point, and they subsequently spend a delectable evening together. The following morning, the story stops cold as she sings a banal song — “I Wish You Could Be Mine” — while accompanying herself on guitar. She then betrays Finney, and gets killed when he shoves her in the path of a bullet. (No surprise, then, that the title song vocalist wants to be set free; this guy’s treatment of his bedmates is ruthless.)

Helen joins Finney shortly thereafter; she’s introduced against a languid variation of the title theme, the melody taken by solo muted trumpet against soft percussion. The instrumentation shifts to gentle flute, tasty vibes and guitar as they get to know each other better: definitely the sweetest of Nicolai’s many arrangements of this theme.

The action shifts to Basel, where Birgit injects a virus into the city’s water supply; all businesses close down, as everybody sickens. This gives Kobras an opportunity to break into the unguarded bank containing the American dollars, which are switched for counterfeit bills … a substitution that remains undetected when Helen and the bank manager subsequently visit, to ensure that “everything is all right.” (As noted: She’s useless.) 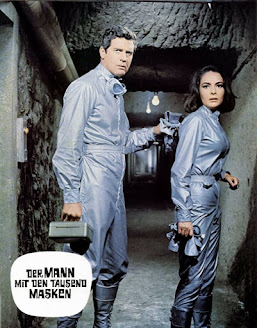 Finney heads to Johannesburg, his arrival accompanied by a swinging, up-tempo reading of the title theme: vibrant unison brass and strings, against propulsive percussion. He pursues another of Kobras’ confederates to Capetown, which turns out to be a trap set by Santos; Finney turns the tables on his attackers — thanks to a spear gun that fires tear gas bombs — but Santos flees. De Martino eschews music during the subsequent motorcycle/car/foot chase, although this sequence screams for action jazz. Santos meets a well-deserved end, which allows Finney to subsequently invade Kobras’ Copenhagen lair while posing as the henchman; Helen, meanwhile, is kidnapped by some of the villain’s other minions … again, during a sequence oddly bereft of music.

Alas, Kobras and Birgit get the drop on Finney, who’s then dragged back to South Africa with them. He’s eventually brought to the underground missile base — a stylish laboratory lair by Cuppini — as Nicolai supplies a series of suspenseful orchestral texture cues. Thanks to yet another mask hidden on his person, Finney escapes his cell while posing as Kobras: an impersonation so effective that Birgit fails to notice the difference, when she spontaneously coaxes him into bed. (Uh-huh. Right.) Finney’s disruptive presence as a second Kobras then causes all manner of confusion, which allows our hero to re-unite with Helen, who has been kept in a cell. They escape topside, maneuvering through a field of automatic machine guns by using special glasses to evade the otherwise invisible infra-red beams (actually what appear to be thick cords of bright red yarn, which is a droll, low-tech touch).

Nicolai maintains ominous, tech-oriented shading during these events — harps, woodwinds, sustained electronic keyboard notes and a da-da-da-dum on kettle drums — and also during the climactic skirmishes: Kobras vs. Chen, and then Kobras vs. Finney. Again, De Martino should have used some of Nicolai’s flamboyant action jazz cues. 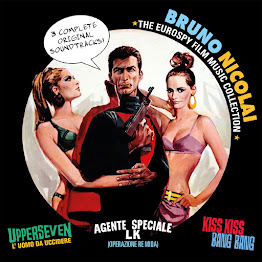 Back in civilization, Finney and Helen enjoy a drive in bustling Basel, against a final lively reading of the title theme. A gunshot makes them duck; the music abruptly cuts off as they look around, and then realize one of their tires just blew out. They laugh in relief, against a mocking, four-note bleat from a muted trumpet, followed by Orlandi’s vocal refrain of the title theme’s final verse … and fine.

The film failed to produce a soundtrack album or single. Nicolai’s score finally was digitized by Japan’s SLC label in 1997; in many cases, shorter cues were stitched together — not always logically — to produce the 19-track album. Worse yet, Orlandi’s title vocal was left behind. Quartet did a far superior job in 2018, when the complete score was included in the box set Bruno Nicolai: The Eurospy Film Music Collection, alongside his scores for 1966’s Kiss Kiss – Bang Bang and 1967’s Agente Speciale LK. Quartet unstitched the Upperseven cues for a 41-track presentation that’s (more or less) in chronological sequence, and includes Orlandi’s title and end vocals.