The publicity machine purrs along... 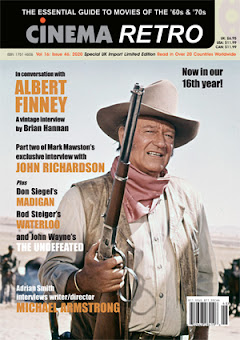 Social-distancing restrictions notwithstanding, I've done reasonably well during the past few months, with respect to securing interest from bloggers, media writers and jazz-oriented radio stations. The nicest part is that everybody thus far has been warmly complimentary; the interviews have been enthusiastic meetings of kindred spirits.

The editors at Cinema Retro — an "essential guide to movies [and TV shows] of the '60s and '70s," which is midway through its 16th successful year — requested a brief "how I came to embrace this project" article, and I happily obliged. The magazine is top-of-the-stack reading when each new issue arrives, and I was honored to join the many authors who've written about film and TV scores within its pages. You'll find the article here ... and while you're at it, take a look around and subscribe!

Mark Lynch, at WICN in Worcester, Massachusetts, was so enthused that he granted my books two episodes of his public affairs show Insight. The first, covering Volume One, aired June 29 and can be found here. The second, for Volume Two, aired July 28 and is archived here. Mark and I had a great time chatting (and we probably could have continued for hours).

Davisville is an award-winning public affairs radio show broadcast by our hometown station KDRT. I've been privileged to be a guest of host Bill Buchanan on numerous occasions, and he devoted the July 6 show to my new books. This was the most novel interview I've done thus far. Under normal circumstances, we tape a show (in advance) at one of KDRT's studios, with his brother Jim running the engineering board ... but the studios are much too tiny, given COVID concerns. We worked instead in Jim's back yard; Bill and I saw on chairs, facing each other about 10 feet apart, each of us with a standing microphone. Jim was an equal distance away, at the third point of a triangle, with his board equipment on a large table. Our one concern was that a neighbor might fire up a lawnmower or leaf blower; fortunately, that didn't happen. The result turned out quite well, as you can listen here.

The website Spy Bop Royale was incredibly useful during my books' research phase; it called my attention to many, many soundtracks that otherwise might have been overlooked. I was surprised to find an unexpected and quite generous plug for the books last month. Many thanks!

I was equally intrigued to find German music critic Henry Altmann's nice write-up at the website NDR Info; he discusses my books alongside Kevin Whitehead's thematically similar new book, Play the Way You Feel: The Essential Guide to Jazz Stories on Film. Here's an English version of Altmann's article, courtesy of Google; the translation is a bit ragged, but the message comes across. The article seems to be related to an episode of the radio show (podcast?) Jazzfacts, which can be found at Deutschlandfunk. Alas, I can't provide an English translation for this, so I hope your German's better than mine!

The new (August) issue of Film Score Monthly has a generous review of the books, but one must be a subscriber in order to access the issue's contents. I'd like to think that anybody visiting my blog already is aware of the terrific articles and information in every issue of this online magazine, and therefore already subscribes. If not, what're you waiting for?

I was lucky enough to obtain a delightful introduction to Volume One by Cheryl Pawelski, a Grammy Award-winning record producer and co-founder of the wonderfully eclectic record label Omnivore. She, in turn, brought my books to the attention of music journalist Bill Kopp, whose MusoScribe blog has informed fans since 2007. He and I had a terrific (and lengthy) phone interview last month, which resulted in a two-part article that debuted yesterday and this morning. Once again, I couldn't have asked for more generous coverage.

I'm aware of at least a few more things in the pipeline, which I'll share when they go live. Stay tuned!