The publicity machine keeps on rollin' along...

I continue to be quite pleased by the attention these books are getting, and the generous reviews and comments coming in from various quarters.
Steve Provizer contributed a thoughtful analysis of Volume One for Arts Fuse, a curated, independent online arts magazine dedicated to publishing in-depth criticism, along with high-quality previews, interviews and commentaries. The publication's more than 60 freelance critics cover dance, film, food, literature, music, television, theater, video games and visual arts. I'm pretty sure Provizer is the first to observe that my writing style is "pithy," a descriptor I love; you can't beat being regarded as "concise and forcefully expressive."

Andrew Gilbert paired his San Francisco Classical Voice review of Volume One with a companion discussion of Kevin Whitehead's Play the Way You Feel: The Essential Guide to Jazz Stories on Film (and he's not the first to have done so). I'm delighted that Gilbert cited me as "an assiduous researcher who casts an exceptionally wide net"; it's nice to have four years of exhaustive, down-the-rabbit-hole research so acknowledged. He also (quite correctly) notes that the book is designed to be read in small doses, lest one be overwhelmed by the information dump. (I like to think these are the ultimate "bathroom books" for fans of this music.)
I also appreciate the shout-out Gilbert gave to my Guaraldi bio. 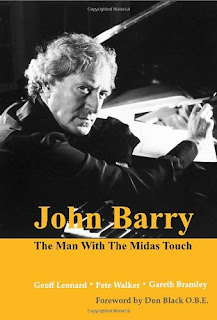 Speaking of such research, these books couldn't have existed without the efforts of other authors who focused on specific individuals; one such title is John Barry: The Man with the Midas Touch, by Geoff Leonard, Pete Walker and Gareth Bramley. I cited and footnoted that marvelous biography many, many times. Leonard co-manages a similarly extensive Barry web site under the same title, which recently gave Volume One a lovely little plug. (And I chuckled over the fact that — given the subject matter — I'm identified as "the appropriately named Derrick Bang.")
Proving yet again that jazz — and even crime/spy jazz — has an international following, the Spanish web site MusicAdictus, gave Volume One some exposure. The commentary wanders a bit, and Google's English translation is a bit ragged, but it's clear that the author enjoyed the book.
Further on the international front, Berlin's popcultureshelf.com is managed by the extremely erudite Alex Ebert. His interest in the books came as a lovely surprise (as I lacked the information to solicit overseas individuals, the way I was able to contact U.S. publications and radio stations). I became aware of Ebert's site back in July, when I stumbled across his insightful review of Volume One.

We began an occasional correspondence, and he honored me further by becoming one of the few individuals to devote separate reviews to each book; his piece on Volume Two has just been published. One cannot ask for better than this summation of Volume One, when he calls it "...a valuable (and rather wittily written) find for all fans of spy movies, jazz buffs or soundtrack collectors with an interest in the golden years of American TV and movie production."
Lastly — but absolutely not least — jazz historian and commentator Steven Cerra similarly devoted lengthy separate essays to each volume, at his Jazz Profiles web site. Cerra actually contacted me a few months before the books were published, having gotten wind of them via early social media chatter. He remembered me from the Guaraldi bio, which he also devoted an essay to, back in 2014. I frankly blush at some of his praise for Volume One, published in early July, a typical passage of which reads thusly: "Rarely is a book so full of facts and information a page-turner, and yet this one is, and that's largely because of Mr. Bang's gifts as a storyteller." As with Alex Ebert, above, Cerra and I also maintain an occasional correspondence, and he's even nicer — and more enthusiastic — informally, than in his published efforts. His take on Volume Two has just gone live.
This may conclude such reviews and commentary; at least, I'm not aware of anything else in the pipeline. Should that be the case, I certainly can't complain about the thoughtful observations, and generosity of spirit, shown by everybody who has taken the time to read and discuss the books. Any and all authors should be so fortunate.
Posted by Derrick Bang at 2:56 PM