From the cutting-room floor: Les Tricheurs 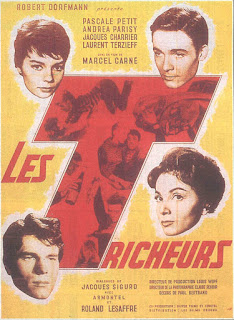 This is another one I hated to lose, given its sensational, wall-to-wall jazz score. But as with Alfie, this is a study of deplorable behavior, rather than actual crime. Nor are these selfish young sybarites deliberately “evil” in the sense of the characters in Roger Vadim’s handling of Les Liaisons Dangereuses (which did make the cut). They’re merely foolish … but goodness, they do have great taste in music.

Director Marcel Carné’s Les Tricheurs — released in the States as either Youthful Sinners or (a more direct translation) The Cheaters — isn’t a crime saga, although the story does include a dollop of blackmail. And while the conventional settings preclude much in the way of atmosphere, Claude Renoir’s black-and-white cinematography does achieve classic noir overtones during a melodramatic finale. For the most part, though, Carné’s film is a study of undisciplined, cynical twentysomethings who believe themselves too hip for conventional jobs, and certainly too cool for something as prosaic as romantic love; they spend all of their time dancing, drinking, swapping bedmates and — most importantly, for our purposes — listening to jazz records. Indeed, few films have depicted youthful decadence with such a ubiquitous swirl of swing. 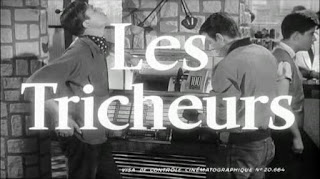 The story focuses on Bob (Jacques Charrier), a “square” university student whose interest in jazz leads to a chance encounter with Alain (Laurent Terzieff) in a record store. The latter, a manipulative bohemian who cheerfully freeloads off his friends, introduces Bob to Clo (Andréa Parisy) and her best friend, Mic (Pascale Petit). Although Bob first hooks up with Clo, he’s quickly smitten by Mic, whose greatest desire is to purchase the expensive Jaguar at the car shop that employs her older brother Roger (Roland Lesaffre). Bob is embraced by the greater Rive Gauche gang with whom Alain, Clo and Mic hang out; his studies begin to slide as his evenings are consumed by sybaritic parties. 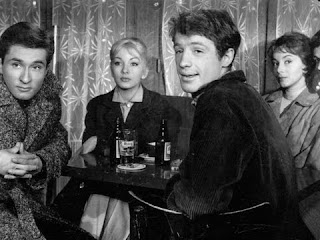 Despite her stand-offish pretensions, Mic falls in love with Bob, but professes the opposite in order to avoid losing face with her friends; taking his cue from her behavior, Bob feigns similar nonchalance. This emotional maelstrom climaxes during a huge, liquor-fueled bash thrown by Clo — her “farewell party,” as she has become pregnant — when Bob and Mic confront each other, with disastrous consequences. The film’s title now comes into play, as it becomes clear that these restless youths are “cheating” themselves out of happiness and true love.

Carné opens his film in a café, the title credits displayed while two young guys bop in front of a jukebox playing JATP’s lively cover of Pete Rugolo’s “Oscar and Pete’s Blues.” (In a nice nod to the soundtrack’s importance, the credits acknowledge all the purchased recordings and the artists performing them.) The camera pans to Bob, looking miserable in a booth by himself; the reason for his anguish then unfolds via a lengthy flashback that begins in a record store — Chet Baker’s cover of “Tommy Hawk” playing in the background — when Bob spots Alain stealing a 45 single. The latter takes Bob to a nearby café, introducing him to Clo and Mic as other patrons groove to Fats Domino’s “Second Line Jump.” Now part of the group, Bob is swept along to Clo’s home — her parents conveniently absent — where everybody dances breathlessly to a pair of JATP originals: “Les Tricheurs,” a mid-tempo swinger that opens with Oscar Peterson’s smooth piano chops, and then delivers sweet solos on tenor sax and trumpet; and the lazy “Clo’s Blues,” with Hawkins breaking hearts on sax, as Peterson and Ellis comp quietly in the background.

The scene shifts to Mic’s apartment, where she “tolerates” a visit from her older brother while Peterson and Gillespie roar through a lively JATP original titled “Mic’s Jump,” emanating from her record player. When that disc concludes, she switches to Gerry Mulligan’s cover of “Bernie’s Tune,” which prompts an appreciative nod from Roger. He departs as Bob arrives, already entranced by Mic; they wind up in bed, then embark on a blackmail scheme that nets the 600,000 francs she needs to buy the Jag. She consents to join him for a dance at the “snobby” club frequented by his father’s social set, and is surprised to find the “oldsters” cutting a rug to the Bob Scobey Band’s cover of “Wild Man Blues” and Al Castellanos’ jovial “Speak Up Mambo.” 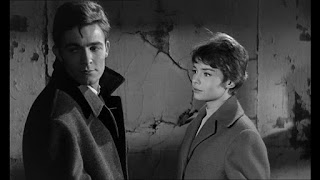 Pride, misunderstandings and willful stubbornness drive Bob and Mic apart, until they both wind up at Clo’s farewell party. Everybody is dancing to Fats Domino’s “If You Need Me” when Bob enters the spacious venue; the mood then gentles down for a slow dance, the revelers swaying to JATP’s “Phil’s Tune,” with its sweet Eldridge sax melody against Peterson’s keyboard comping. Clo, close to hysterics due to the impending marriage that has been “arranged” by her parents, demands that things liven up; she puts the Lionel Hampton/Mezz Mezzrow bopper “Crazy Hamp” on the phonograph, and the crowd responds.

Next up is Buddy Rich’s “Desperate Desmond,” which prompts Clo to scream “Make it louder!” Bob and Mic have their final confrontation in one corner; crushed by his (contrived) indifference, she runs from the room, hops into her car and roars off into the night. Bob follows in a borrowed vehicle, realizing that he needs to admit that he definitely loves her. He chases her down a twisting two-lane road at ever-increasing speeds, the ongoing blast of “Desperate Desmond” now becoming a non-diegetic underscore. The scene’s intensity peaks as Rich hits the song’s legendary solo, the furious drumming propelling Mic to floor the accelerator ... until she crashes.

Back in the present, the flashback concluded, Bob — wiser but now alone — watches as two boys and two girls, younger even than he is, agree to raid their parents’ liquor supply for a rowdy party that evening ... and then, with the word “Fin,” the film concludes. 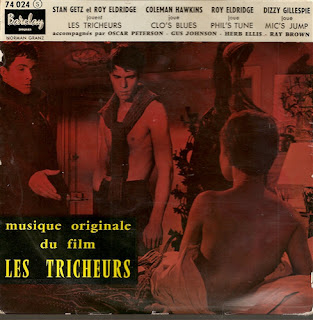 The four original JATP tracks — “Les Tricheurs,” “Clo’s Blues,” “Phil’s Tune” and “Mic’s Jump” — were released as a double-disc 7-inch EP on France’s Barclay label. Three of the “purchased” songs — “Tommy Hawk,” “Bernie’s Tune” and The Champs’ cover of Chuck Rio’s “Tequila” — were issued separately, on a 45 single by Disques Vogue. Verve followed up with a 10-inch LP that featured “Les Tricheurs” and “Mic’s Jump,” with three additional songs recorded during the same studio session, featuring Sonny Stitt guesting on alto sax, although none was used in the film: “Sweet Georgia Brown,” “Get Happy” and “On the Alamo.” The four Barclay tracks were augmented by “Crazy Hamp” when they were digitized in 1988 on the Fontana label, for a compilation disc paired with Art Blakey and the Jazz Messengers’ score for 1959’s Des Femmes Disparaissent. Most recently, the four Barclay tracks and the three “extras” (with Stitt) were granted prestige treatment as part of Moochin’ About’s 2012 five-disc anthology set, Jazz on Film: Beat, Square & Cool.