I acknowledged, in my introduction to both books, that space (and time) constraints prevented much of a dive into international waters. The few films that did make the cut are mostly low-budget Italian James Bond rip-offs, and I scarcely investigated the output from other Western European countries.
A German correspondent named Alex recently encouraged me to check out his country's Jerry Cotton film series, on the strength of what he promised were their vigorous jazz scores. Alex did not overstate; this resulting post is apt to be the first of many visits with Cotton.
******** 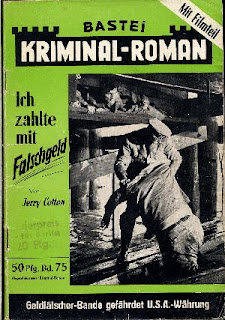 The Jerry Cotton phenomenon is nothing short of astonishing.

The German pulp magazine character — a resolute American FBI agent — debuted in 1954, in issue 68 of the anthology title Bastei Kriminal-Roman (Bastei Crime Novel, Bastei being the publisher), in a story titled Ich suchte den Gangster-Chef (I Sought the Gangster Boss). The character proved popular, and — after becoming a frequent staple in Bastei Kriminal-Roman — earned his own weekly title in 1956: G-Man Jerry Cotton. That magazine continues to be published to this day, albeit monthly; as these words are typed, issue No. 3,320 (!) can be ordered from Bastei’s web site. At its peak, the magazine was translated into 19 languages for readers in 52 countries … but, ironically, Cotton never successfully penetrated the U.S. market. His crime-laden adventures, told in the first person, supposedly are authored by the man himself; they’ve actually been ghosted by scores of different writers, most notably Heinz Werner Höber. A popular urban legend insists that this first-person perspective has fooled many readers, over the years, into sending letters to Cotton in care of the FBI’s New York offices (which the FBI cheekily refuses to confirm or deny).

Cotton’s exploits take place in an idealized and romanticized version of the United States: a view of American life that feels somewhat time-locked in the atmosphere of the post-World War II era, despite — as the decades passed — the eventual introduction of computers, smart phones and Al-Qaeda terrorists. Indeed, the many German authors’ vision of an amiably multicultural New York — mostly free of racism — has been far more progressive than reality. Jerry’s partner and best friend — the Watson to Cotton’s Holmes — is Phil Decker; they both report to John D. High, usually known as “Mr. High,” head of the FBI’s New York office. 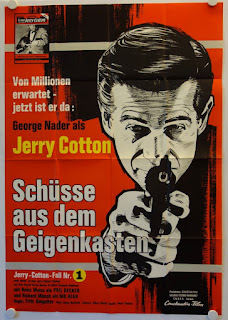 A jump to the big screen was inevitable, and Jerry Cotton debuted on the big screen in 1965’s Schüsse aus dem Geigengasten (The Violin Case Murders). An early sequence in director Fritz Umgelter’s fast-paced 89-minute thriller could be confused with an FBI recruitment film, thanks to a gallant, gung-ho spirit echoed by The FBI, which debuted on American television that same year. Jerry is played by handsome, self-assured American actor George Nader, who bounced back and forth between movies and TV shows in the 1950s and early ’60s: most famously (for our purposes) as the title character in the 1958-59 TV series The Further Adventures of Ellery Queen; and most infamously (not for our purposes) as the star of the 1953 sci-fi stinker Robot Monster. Umgelter’s modestly budgeted thriller remains a satisfying — if quaint — slice of Hollywood-style B-cinema, and George Hurdalek’s original script mirrors the hard-charging pulp sensibilities of Cotton’s print adventures. The film also boasts a terrific jazz score by Peter Thomas, who’d repeat this duty for what would become an eight-film series — all starring Nader — that concluded with 1969’s Todesschüsse am Broadway (Dead Body on Broadway).

This initial entry is laden with Thomas’ contributions, in both small combo and big band styles: from short jazz cues inserted for mood; to fully fleshed swingers allowed to play at length, thanks to Umgelter’s tendency toward dialogue-less montage sequences (likely to minimize the expense of post-production looping). Two themes stand out, and repeat throughout the film: the vivacious 1-1-1-3 main theme, immediately dubbed “The Jerry Cotton March,” which often backs his aggressive, take-no-prisoners action scenes, and which would become ubiquitous as the series continued; and a mischievous 4-2-2-2-1 “bad guy anthem,” often heard when crooks are up to no good, or fleeing from the scene of their crime. 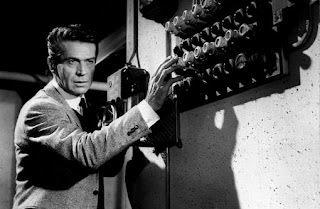 A brisk, vocalese version of the “Cotton March” plays behind the explosive title credits, which conclude as a thug — whose machine gun is concealed within a violin case — mows down a helpless woman in her bedroom. (At times, this film has an impressively nasty streak.) He’s part of a gang led by Kilborne (Franz Rudnick), whose well-rehearsed heists reflect meticulous planning. This initial caper involves emptying the concealed safe in a fancy home in Pasadena, California; the gang then lands in Chicago, where they retrieve gold hidden within a barn (viciously killing two more innocents in the process). They then head for New York, where their next target will be an elderly collector whose opulent home is filled with priceless antiques and valuables. These nefarious activities come to the FBI’s attention via phone calls to Mr. High from Mary Springfield (Heidi Leupolt), who worries about the fact that her sister Kitty (Sylvia Pascal) is involved with Christallo (Hans E. Schons), Kilborne’s second-in-command. Other gang members include the smarmy, good-looking Percy (Helmut Förnbacher), with a fondness for knives; and the hulking, trigger-happy Latschek (Robert Rathke).

Nader’s Jerry Cotton is introduced against a buoyant, marching-band arrangement of his theme, while he strides past trainee FBI agents navigating a crawling, climbing, running and jumping obstacle course. He flirts a bit with Mr. High’s secretary Helen (Helga Schlack), and then he and Phil (Heinz Weiss) are given the assignment to search New York for Mary Springfield: a montage sequence set against a piano- and sax-driven big band swinger, fueled by a sassy walking bass. Alas, Mary isn’t long for this world; the gang takes her out, but — in true pot-boiler fashion — she gives Jerry some crucial information before expiring in an ambulance. 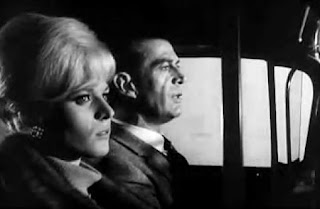 Armed with the knowledge that the gang hangs out in a bowling alley near Penn Station, Jerry “disguises” himself with beatnik apparel, feigns being an alcoholic, and picks a fight with several guys to prove his toughness. Thomas backs this fracas with a jukebox source cue: a droll, string-heavy orchestral oom-pah tune with a cute flute line. The ruse works, and Jerry is accepted into the gang (although they fully intend to betray him, as the fall guy for their upcoming score). He gains Kitty’s trust by proving that Kilborne had her sister murdered; she tells Jerry that the plan involves setting off a bomb in a grade school, as a distraction when the gang robs the wealthy collector. Thomas supplies a tasty piano trio arrangement of Cotton’s theme, as he and Kitty drive through the city, searching for the right school. They find it just as two of the gang members set the bomb … despite the fact that the scheduled school field trip has been canceled — which is why the school should have been deserted — and the building now is filled with children! (These guys are cold.)

Brief atmospheric cues back Jerry’s frantic search for the bomb; across the street, throbbing bass and an ironically cheerful melody follow the gang as they invade and rob the wealthy collector’s home, needlessly killing his manservant in the process. Jerry locates the bomb just in time, and tosses it into a closed empty closet to minimize the damage; he dusts himself off against a triumphant big band blast of his theme, then emerges just in time for a rooftop pursuit of the villains, set to an exciting burst of action jazz. 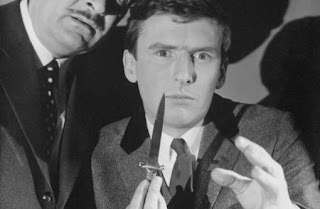 Alas, the baddies get the drop on Jerry, but only briefly; he escapes again, now knowing that the gang intends to flee the city in a yacht. Phil joins the resulting pursuit by helicopter and boat; Thomas heightens the action with a vibrant vocalese/big band arrangement of the “bad guy anthem.” Once back on land, Phil nearly perishes beneath rolling gasoline barrels that have been set on fire; he gets rescued by Jerry in time to join the final gun battle, as everybody runs and dodges throughout a boat yard. Suspenseful stingers add tension as the baddies are neutralized one by one; a triumphant, whistled arrangement of the Cotton march backs Jerry when he puts handcuffs on the last thug. Smash-cut to a brief, flirty encounter with Helen, then Thomas cues the end titles with a rousing, big band handling of the “Cotton March.” 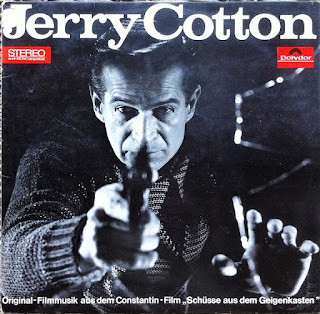 Much of Thomas’ score was released by Polydor on a 1965 LP titled Jerry Cotton: Schüsse Aus Dem Geigenkasten. The album also generated a single, with “Jerry Cotton March” and one of the heist themes, “Jewelry Party.” As subsequent films followed, Polydor assembled the best tracks onto a 1967 compilation LP, FBI Man Jerry Cotton. Interest in Thomas’ Jerry Cotton scores peaked again as the turn of the century approached; the Crippled Dick Hot Wax! label responded in 1997, with the digital 100% Cotton (The Complete Jerry Cotton Edition). That two-disc compilation includes music from all eight films, along with many of the tracks from the original Polydor LP. Not to be outdone, in 2010 Germany’s All Score Media released a second compilation — Jerry Cotton: FBI’s Top Man — that features 28 of the series’ most popular tracks; again, many come from this first film.

Nader’s Jerry Cotton would return, mere months later, in 1965’s Mordnacht in Manhattan (Manhattan Night of Murder). About which … more to come.