Actually, I'm not sure a film this dreadful can be regarded as "lamentably" overlooked, but it certainly was undeservedly overlooked, given that its score is worthy of our attention. I confess to having been previously unfamiliar with Jerome Louis Jackson, in part because his film work was so minimal.
Badge 373 finally came to my attention during a deeper dive into Robert Duvall's career. That said, I'm pretty sure it never earned a spot on the résumé that his agent circulated...
******** 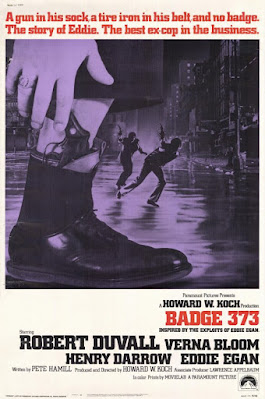 Although sometimes regarded as French Connection 1-1/2 — being “inspired” once again by the exploits of former New York City police detective Eddie Egan — 1973’s Badge 373 is a tawdry cop thriller that doesn’t deserve mention in the same breath as William Friedkin’s ’71 classic. Veteran producer Howard W. Koch made a serious mistake when he helmed this project — Badge 373 was his last hurrah as director, and deservedly so — and journalist/author Pete Hamill’s clumsily clichéd script is littered with repugnant racism. Robert Duvall is stiff as a board as “Eddie Ryan,” and the rest of the cast is similarly wooden … although, given Hamill’s laughably atrocious dialogue, they can hardly be blamed. Ironically, Egan himself turns in the best performance, as Ryan’s sympathetic boss.

The music fares far better than the actors. In this post-Shaft environment, with blaxploitation flicks and soundtracks on a rapid rise, the scoring assignment went to soul/R&B singer/songwriter Jerome Louis Jackson — better known as J.J. Jackson — whose career initially blossomed when he and Pierre Tubbs co-wrote 1966’s hit tune “But It’s Alright.” Jackson’s cues here favor brass fanfares, groovy guitar licks and propulsive percussion, all of which are prominent during the brief title credits sequence. That said, the music serves mostly as atmosphere; it’s difficult to discern a distinct main theme.

(Contrary to what numerous ill-informed sources insist — including no less than the Internet Movie Database — this J.J. Jackson is not the other fellow of the same name, best known as an MTV VJ in the 1980s. That individual — John J. “J.J.” Jackson — died in 2004; Jerome Louis Jackson is with us still.) 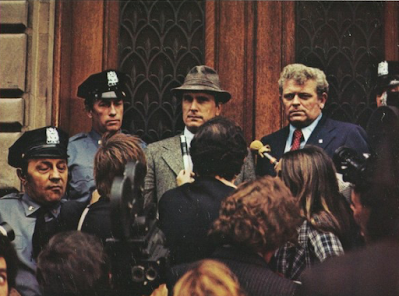 The story begins when the unapologetically racist Ryan is suspended after being blamed for “helping” a Puerto Rican suspect fall to his death during a rooftop scuffle. Badge or no badge, Ryan turns vengeful vigilante when his former partner is brutally killed. Clues lead to wealthy Puerto Rican drug kingpin Sweet William (Henry Darrow, in an atrocious cartoon performance); distractions are supplied by violent young political activists determined to free their native Puerto Rico from corrupt American dominance. To that end, these independentistas intend to purchase $3 million worth of illegal guns from Sweet William. Along the way, Ryan shamefully neglects new girlfriend Maureen (Verna Bloom), who displays the patience of a saint while being treated like dirt; this romantic subplot is just as unpalatable as Ryan’s reflexive misanthropy.

Koch mostly eschews music — aside from occasional diegetic R&B vocals — during the film’s first act. (Keep an eye out for Latin/salsa superstar Johnny Pacheco and his orchestra, during an early nightclub scene.) The tone shifts when Ryan tracks down a junkie hooker who supplies his first lead. His subsequent near-fatal encounter with an unseen gunman takes place against the film’s first action cue: a furious blast of brass and percussion, while Ryan ducks for cover. When he returns and finds the young woman dead, Jackson shifts to mournful muted trumpet, flute and vibes. Things heat up again during Ryan’s subsequent attempt to chat with Sweet William; this prompts a confrontation with the independentistas — who quite reasonably resent the presence of this disrespectful honkie asshole — which leads to one of the most laughably ludicrous vehicular chases in cinematic history. 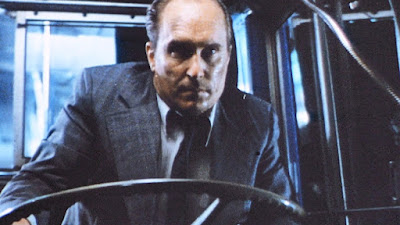 Koch must’ve wanted to match Gene Hackman’s car/subway pursuit in The French Connection, but the result here is ridiculous. Ryan, trying to escape the angry independentistas, hijacks a bus filled with passengers (!) and — during the subsequent, slow-moving chase — employs the large vehicle as a battering ram against the half-dozen pursuing cars and pickups. Most of this interminable fracas is left unscored — another ill-advised directorial decision — until the end, when Jackson inserts some token brass and percussion.

Forced to convalesce from injuries sustained during this melee, Ryan takes Maureen to a wooded mountain cabin; she expects romance, but he really just wants to sharpen his gun skills, since his dominant arm and hand are in a cast. Jackson complements her undisguised disappointment with a melancholy blend of muted trumpet, flute and vibes, all backed by soft guitar.

Once sufficiently recovered, Ryan returns to the city and charges back into action. Jackson channels a bit of Isaac Hayes — wah-wah guitar, throbbing percussion and explosive brass fanfares — as events lead to a climactic shoot-out on the docks, just as the crates of guns are being loaded onto a ship bound for Puerto Rico. This lengthy flash of action jazz is far more satisfying than Ryan’s just-plain-stupid final encounter with Sweet William.

Badge 373 was a deservedly critical and public flop; no surprise, then, that it failed to produce a soundtrack album. Jackson scored only one more film — 1974’s low-budget Summer School Teachers, a typically smutty Roger Corman exploitation flick — before wisely focusing wholly on his own music career.