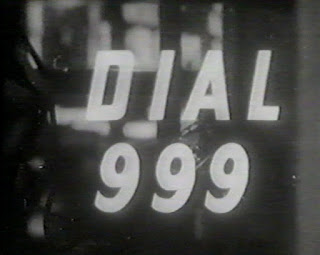 “Without public good will, any police force is licked.”

Inspiring statements of this nature, always spoken with grave sincerity, were a signature part of Dial 999, a British crime drama that ran a single season of 39 episodes beginning in the summer of 1958. Producer Harry Alan Towers sank a lot of money into this series, which allowed for plenty of location shoots on cinema-style film, rather than videotape; that, in turn, granted composer Sidney Torch more opportunities for underscore cues, than were present in most British shows of the same era.

Dial 999 — referring to the UK’s telephone emergency service — is one of the earliest television police procedurals, with each half-hour story focusing on crime scene analysis, investigative technique and dogged detective work. The premise finds Mike Maguire (Canadian actor Robert Beatty), a Royal Canadian Mounted police inspector, sent to “London Town” to study, learn and assist in Scotland Yard cases. This grants scripters an opportunity to “educate” Mike — as various examples of police work are explained to him by a fellow detective — which similarly instructs viewers, who also are encouraged to “do their civic duty” by cooperating with coppers. Such attitudes seem quaint today, but Beatty puts calm earnestness into his performance; his Mike Maguire definitely is a man to admire. 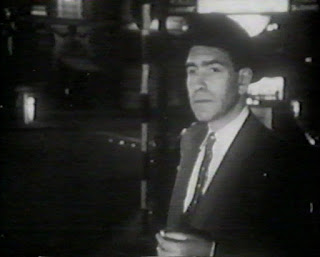 The cases run an impressive range, each solved in an economical 25 minutes: stopping a serial killer who targets young women; setting gangland thugs against each other, in order to arrest all of them; pondering why a career jewel thief suddenly tries to steal a fur coat; pursuing a gang that robs a mail man traveling from Edinburgh to London via train (anticipating England’s “Great Train Robbery” by five years); and tracking bookies who fix horse races, along with the usual gaggle of pickpockets, killers, bank robbers and confidence men. Maguire eventually leaves London to “apprentice” on cases taking place in various countryside towns, always relying on evidence such as fingerprints, shoe impressions and sharp-eyed civilian witnesses. As a result of his travels, Maguire never gets a regular partner, and instead is teamed with various associates.

Six episodes were written by Brian Clemens — soon to be known for The Avengers — but under the pseudonym “Tony O’Grady,” because he was simultaneously writing for several other programs.

Torch, who created the still-popular BBC program Friday Night Is Music Night in 1953, scored Dial 999 with an eclectic quintet: vibes, guitar, bass, drums and harmonica (the latter by Tommy Reilly, the only credited musician). The show doesn’t have a title theme; the opening sequence repeats Beatty’s voice-over introduction that explains his relocation to England. 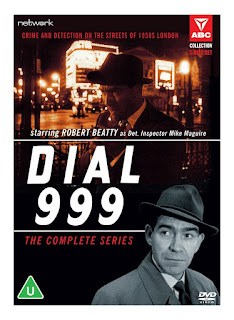 Torch’s main theme instead plays over the closing credits: a languid little jazz ballad in 4/4 time, with rising and falling triplets on vibes comping against similarly rising and falling triplets on Reilly’s harmonica. Investigation montages receive brief, mildly swinging jazz cues with vibes handling arrangements of that primary melody. Action sequences — skirmishes, car chases — often are backed by cheerful solo harmonica: a bizarrely inappropriate counterpoint to serious and sometimes quite dramatic events. (Some directors clearly had very strange musical taste.)
The show never produced a soundtrack album or title theme single. That said, interest is likely to increase with the April 2021 DVD release of the entire 39-episode season.
Posted by Derrick Bang at 7:33 AM