How could I possibly have missed this one, for Volume One? 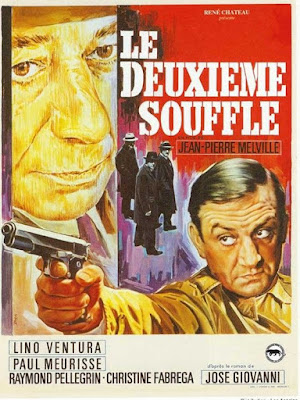 It's particularly baffling, given the well-deserved attention paid to so many of writer/director Jean-Pierre Melville's other jazz-hued crime films. But that's the nature of the game, and I knew it going in: the very definition of "falling through the cracks."

Thank goodness for blogs, and for being able to atone for such eye-rolling lapses.


A man is given but one right at birth: to choose his own death. But if he chooses because he’s weary of life, then his entire existence has been without meaning.

So begins 1966’s Le Deuxième Souffle (Second Wind), writer/director Jean-Pierre Melville’s similarly brooding follow-up to his earlier crime dramas, Bob le Flambeur and Le Doulos. As with those films, the characters in Le Deuxième Souffle are defined less in terms of being “good” or “bad,” and more by whether they adhere to loyalty and honor; the “villains” here — regardless of their position on either side of the law — are those who succumb to avarice and betrayal. The film is based on Corsican-born, convicted killer-turned-author José Giovanni’s 1958 novel; he and Melville collaborated on the screenplay. The dour film noir atmosphere is enhanced by Marcel Combes’ gritty monochrome cinematography.

The story opens as career criminal Gustave “Gu” Minda (Lino Ventura) escapes from prison; he reunites with his lover, Manouche (Christine Fabréga), who runs a posh Parisian restaurant alongside her stoic and resolutely devoted bodyguard, Alban (Michel Constantin). Gu arrives just in time to dispatch two thugs sent by rival club owner Jo Ricci (Marcel Bozzuffi); as is Gu’s custom, he kills them without a second thought. Manouche wishes to abandon her dangerous career, if only Gu will accompany her; he’s unwilling to do so without financial security.

He therefore joins a gang planning to steal cases of platinum from an armored car transporting the precious metal along twisty and (mostly) deserted mountain roads; the caper is masterminded by Jo’s brother Paul (Raymond Pellegrin), who bears Gu and Manouche no ill will. The heist — the film’s centerpiece — goes down flawlessly, although the caper draws the attention of Gu’s longtime nemesis, Police Inspector Blot (Paul Meurisse). Despite operating on opposite sides of the law, Gu and Blot respect each other’s “honor code”; the same cannot be said about Ricci and Blot’s subordinate, Inspector Fardiano (Paul Frankeur), neither of whom bothers with principles. Melville methodically develops an atmosphere of grim inevitability; it’s obvious that these and assorted sidebar characters — notably the enigmatic Orloff (Pierre Zimmer) — are destined for a bad end.

Orloff declines the offer, suggesting Gu instead; Paul welcomes the opportunity to work with the man who masterminded the “gold train heist” a decade earlier. As zero hour approaches, Paul, Gu, Pascal and Antoine silently kill time on the deserted mountain road, awaiting the armored truck and its motorcycle cop support team. Gérard inserts his one and only non-diegetic cue here — pensive bass, piano and vibes; agitated trumpet licks; twitchy drum kicks — as the men anticipate what they know will be a savagely violent encounter. Following the heist — 84 minutes into this 150-minute drama — Melville completely shuns the use of music in any form, until the melancholy trumpet lament that accompanies the end credits. Even here, the music abruptly cuts off long before the credits conclude. 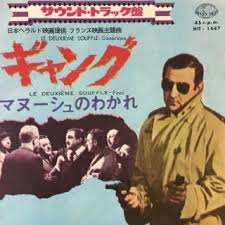 No soundtrack album has ever been released, although a 45 single debuted on Japan’s Seven Seas label in 1967. It features three tracks — “Le Deuxième Souffle,” “Generique” and “Final” — which have yet to be digitized.

The film was remade in 2007 by director/co-scripter Alain Corneau, who eschews the original’s expressively moody, film noir atmosphere for wretched excess and a garish color palette; the cast, headed by Daniel Auteuil (Gu) and Monica Bellucci (Manouche), is completely wasted. Bruno Coulais’ dour symphonic score doesn’t come within shouting distance of jazz, with the exception of a single tasty vibes combo cue (“Chez Ricci”).
Posted by Derrick Bang at 9:32 AM